So I’m celebrating Chimamanda Ngozi Adichie today. A Nigerian novelist, activist, writer of short stories and nonfiction. A woman I admire so much. A woman who believes strongly that women should be allowed to be so many things. A phenomenal woman who is truly a source of inspiration to me. 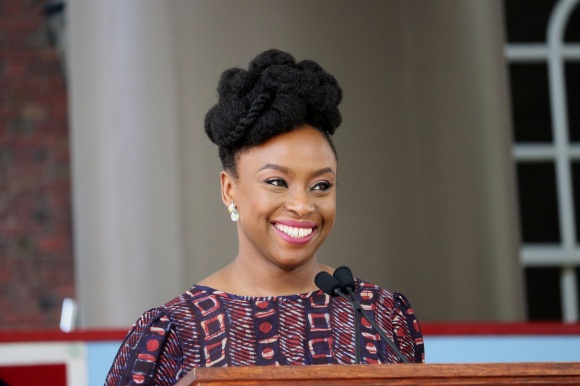 Chimamanda Ngozi Adichie was born in Nigeria on the 15th of September 1977. Chimamanda grew up in Nigeria. Her work has been translated in to thirty languages and has appeared in various publications including the New Yorker, Granta, The financial times etc. She is the author of the novels Purple Hibiscus which won the commonwealth writers’ prize and the Hurston/Wright Legacy Award; Half of a Yellow Sun which won the Orange Prize and was a National Book Critics Circle Award Finalist and a New York Times Notable Book; and Americanah which won the National Book Critics Circle Award and was named one of The New York Times Top Ten Best Books of 2013. Her Novel Americanah was published around the world in 2013 and has received numerous accolades.

Chimamanda has been invited to speak around the world. Her 2009 TED Talk, The Danger of a Single Story is now one of the most-viewed TED Talks of all time. In Dec.2012, Chimamanda had a classic talk that started a worldwide conversation about feminism on the TEDxEUSTON, when she spoke on “We should all be feminist”. Chimamanda is a recipient of a Mac Arthur Foundation Fellowship.

These are few inspiring quotes from Chimamanda Adiche;

I totally love and admire Chimamanda. She’s one in a million and I believe if every woman had an atom of “Chimamandaness” in them, the world would be a better place.
Although I do not believe in being actively a feminist as I do respect and believe in my African (most especially Yoruba) culture.
However, that little atom of feminisn creates more awareness around how women are being treated in the world. I do think that we should encourage each other to be more and more out there. We can also rule the world, we can be president, we can be directors, we can be what we believe we could be and what we want to be.
I have read a couple of her books including “We should all be feminists”. It was interesting to hear other people’s (who also read the book) thoughts around it. I remember someone did mention that she was a bit too extreme as she would use very rare examples such as : in Nigeria, when a man and woman goes out, if the woman tips a waiter for example, the waiter will then look at the man thanking him and not the woman. Simply because they believe that the man is the head and the breadwinner of the family. They believe that even though the money was given by the woman, it actually came out from the man’s pocket!
I think such mentality is quite derogatory in regards to the women out there.
This person did mention that the message in the book was being exaggerated as it is a case in a million. They also mentioned that the mentality has changed in Nigeria and women are now beginning to get the same respect as men.
I would like to hear your thoughts around this as I think it’s quite interesting.

Thanks Anike. Yes, It’s quite interesting actually. For me, I don’t think the message was being exaggerated. I think its better now but we still have a long way to go to achieve gender equality.